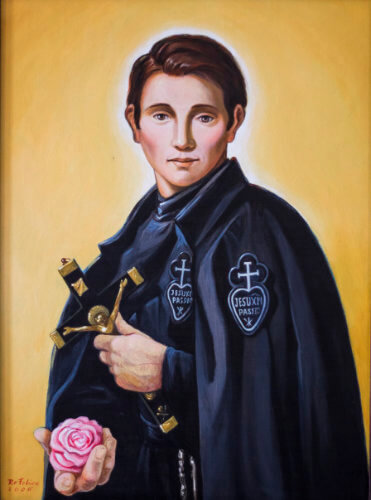 Born to Peter Paul and Cecilia Santamaria on May 4 1883 and baptized Ferdinando the following day. He was born not far from a place that became famous in World War 2 as the scene of terrible losses of soldiers in the battle of Monte Cassino. His parents ran a small rope-making business.

Young Ferdinando was a young man in a hurry. He was Confirmed at the amazingly young age of five months. He wanted to join the Passionists but was too young and had to cool his heels and wait. He said to his father one day: “Life flows like water… Our days quickly pass away… And then what?” He already had a wisdom beyond his years.

Ferdinando made his vows as a Passionist with the name of Grimoaldo. He started his studies for the priesthood, but would never make that goal. He was known among his brother Passionists for his gentleness and kindness towards others. He was passionately determined to keep growing in love for Jesus with the support of Mother Mary. At the ripe old age of 19 he was diagnosed with acute meningitis and within a couple of weeks he died on November 18 1902.

As Pope John Paul II beatified Grimoaldo in 1995, he said this of him: “Young people today and in the future can see in him a model of simple and generous spirituality, firmly rooted in Christ’s Easter mystery.”

Read more about other Passionist Saints and Blessed