In 1995 four men, Anselm Turner, Greg Kirby, Ignatius Willy and Hilary O’Donnell were asked to go to PNG. The establishment of a Mission in Papua New Guinea perhaps was a the most significant expansion with an influx of ordinations and students in the province. This was an incredibly primitive and demanding venture. The story of the Mission is told elsewhere, but the foundation began a significant contribution of the Province in manpower and other resources to an under privileged part of the world. 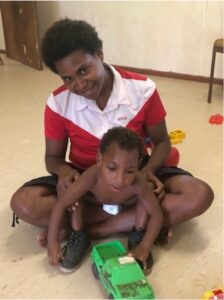 The Passionists currently operate in two locations in Papua New Guinea. The first is in Boroko, Port Moresby where the St Gabriel’s Community is located. Fr John Curtis along with Fr Pat McIndoe, Fr John Auram and Fr. Joey Liala oversees this community which also serves as a student house for men in the early stages of formation. Fr John Curtis CP is also the Parish Priest of the nearby St Joseph’s Parish.

The Passionists also have a presence in Vanimo in the northwest of PNG where Fr Valensius is the current Vicar General of the Vanimo diocese and  keeps a watchful eye over the Senta Bilong Helpim along with Sr. Rowena.